Pretty much flat for BTC last week, whereas ETHUSD closed up +13%. Upside momentum needs to build, otherwise those previously printed swing lows could be tested in the medium-term.

The 38000-385000 zone looks like an area that has flipped multiple times. Now many Offers await, so it’s a resistance level to keep an eye on.

35000 is clearly support, with lots of Bids there. If this level breaks, it could be a big fall until the next swing at 30000, which is also likely to be an area of max pain (and many Sell Stops).

The 2800 level broke with a lot of momentum, but buyers struggled to take 2850, and the retest failed. Now prices are trading under 2800 once again.

A third positive close for BTCUSD last week, up +9%. ETHUSD actually closed down -7.38%. Perhaps this is the beginning of the decoupling after the latter cryptocurrency’s outperformance and then more aggressive crash. 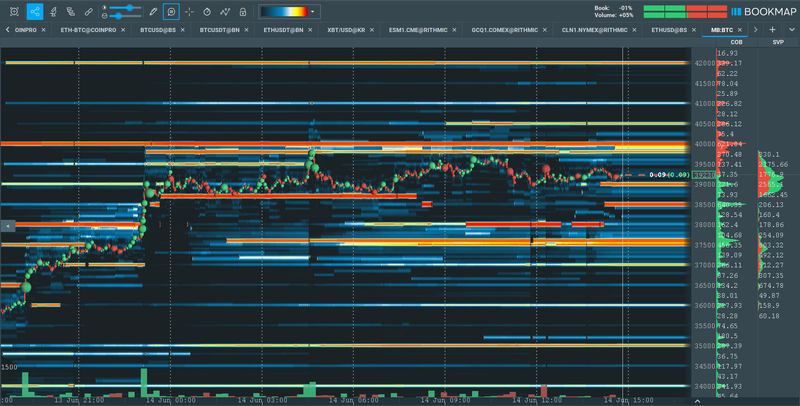 BTC is on another run to kick Monday off, blowing through large Offers through 38,000 and a longer-term wedge pattern, printing a higher high on the weekly chart.

The pair traded just shy of huge 40,000 offers, the buying being absorbed by Offers just below. But the huge Bids that appeared to support the rally then absorbed selling on the way down, and it seems that the upside is under threat once again. 40,000 and 42,000 Offers are the next targets to the upside. 39,000 Bids currently support prices, 38,500 and 37,500 sit below.

Similar moves here, the pair rising and breaking 2500 Offers before retracing. The pair is lagging BTCUSD and 2400 Bids are huge, 2350 also very big.

BTCUSD failed to close higher above the long term swing high the pair broke out from last week, closing down -8.77% on the week. ETHUSD didn’t fare any better, closing down -10.67%.

The pair is in freefall, closing down 5 out of the last 6 daily trading sessions, and is currently down nearly -9% on the current session. 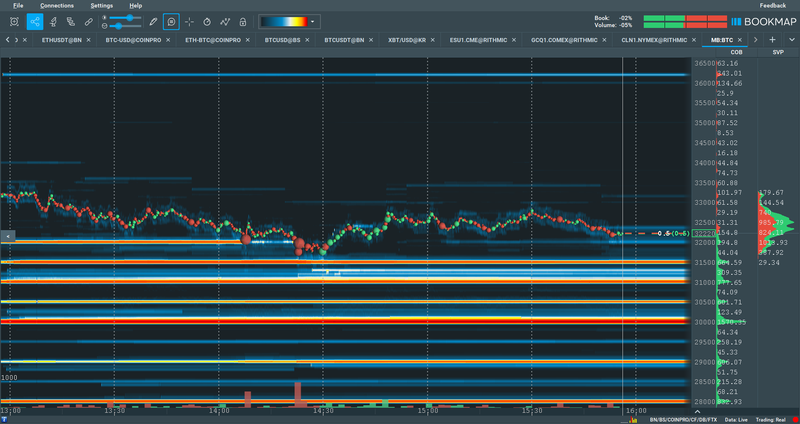 Zooming in further to view the action today, we see a huge quantity of Bids at 30000. This is also a swing low on the weekly, which if breaks may see the market crack wide open.

Huge Bids at 2000 seemed to halt the fall in prices for a short time, but eventually heavy sellers reentered the market and the pair dropped heavily again.

The two main cryptocurrency pairs are still in a balancing act, unsure whether to continue the longer-term downtrend and confirm the bear market, or recover. ETHUSD closed down nearly -12% on the week, BTCUSD did less bad at -2.5%.

As we can see, the pair failed to breach the high above 35500 at the start of the week, the Offers around 35000 absorbing buyers.

30000 is a huge level. Bids await, but it’s also a swing low and there is likely to be a capitulation if it breaks.

Naturally a similar pattern here, except here it was Offers from 2000 through 2500 that absorbed the break of the high. Bids layered all the way down to 18500, but no large levels in sight.

The aggressive move up seemed to be because of buying, but the move down because of selling AND also because of a lack of bids until selling exhaustion.

@DTSS g&e. traded pm setup and open setup. at open could play it better by setup instead played it by top ticks
@jtraderco
@SmallCapRoom
@bookmap_pro