Dogecoin: What Are Memecoins (and How To Trade Them)

Memes have been an integral part of the internet for decades, playing a highly important role in the forming of its culture. Memecoins are the latest form of memes, having branched out from the birth of cryptocurrencies.

The first memecoin is the now famous Dogecoin, based on the internet meme of a Shiba Inu dog expressing its amazement with deliberately broken English. 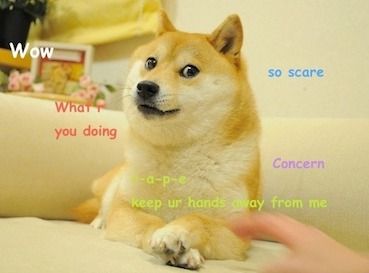 Fig 1- The “mascot” for Dogecoin, and the original meme it is based on (source: Wikipedia).

The word meme was first used by evolutionary biologist Richard Dawkins in his book The Selfish Gene. The idea of a meme is just that: an idea. The really interesting dynamic of memes is that they are ideas that spread virally, mutating as they branch out across the ether. Essentially, they are the hyper-speed evolution of cultural ideas.

These newer memecoins are often the go-to cryptocurrencies for amateur investors and traders, since they are priced in cents rather than dollars and hence seem cheaper. Of course, the pricing of any particular coin doesn’t say anything about its value, and investors can buy and sell portions of most coins (up to a millionth, in Bitcoin’s case).

The only big difference between Dogecoin and other cryptocurrencies like Bitcoin or Ethereum is that Dogecoin is not based on limited supply or smart contracts, but rather culture.

If we are to try and understand Dogecoin with the aid trading analogies, then it may help to think of investors in Dogecoin as using a sort of trend following strategy. But in this case, instead of the strategy based purely on trading price, it trades the cultural phenomena embedded in memes. The defining factor is still price, but instead of price being the core driver, instead it’s the cultural impact of a mass of people feeling ‘in on the joke’ that defines the price. Since Dogecoin is based on the very intense human emotion that is humor, it has quite a powerful force behind it. The risk is that—like all kinds of trends—humor can be transitory, and what is considered to be funny now may not be in the future.

Investors in memecoins tend to be “HODLers” (a term which is also a meme in itself, meaning holders, or long-term investors). This can create a lack of supply in the market, with investors hoarding coins like collectors, which can in turn lead to explosive price action to the upside.

On the other hand, this one-sidedness of the market can lead to violent price crashes if a large portion of the core investors lose faith in the coin. A recent example of this was during Elon Musk’s appearance on the comedy show Saturday Night Live, when during a skit in reply to the question “what is Dogecoin?”, he joked that “it’s a hustle”.

Some traders profited handsomely from that trade, buying the weeks ahead of his scheduled appearance, and selling the night of the show. It was a classic “buy the rumour, sell the fact” trade, as people bought in the excitement of the build up to the show, but then weren’t sure how to take the joke on the night.

It seems that celebrities are having a huge influence on market sentiment and perception of these new assets, and their whimsical comments on TV or Twitter can move prices quite dramatically. Is this a sign of the fragility of the cryptocurrency market and ultimately unsustainable? Or is it just a new market truth? 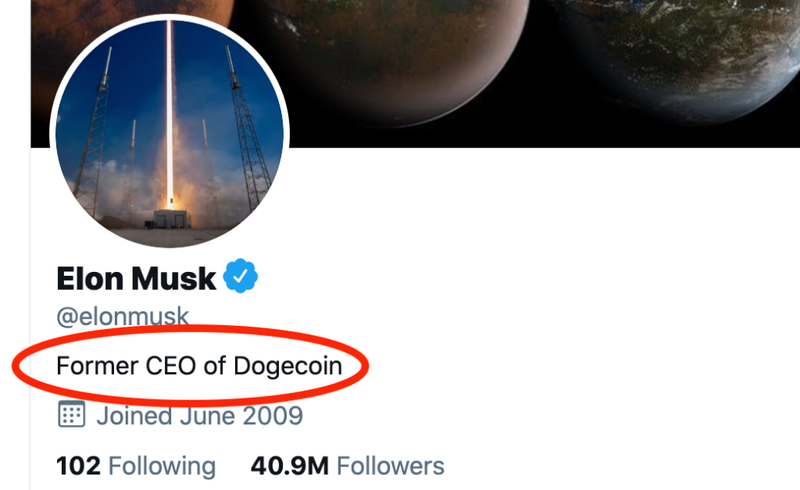 Fig 2 – One of the many jokes posted on Twitter by the billionaire, which often have a large impact on the price of Dogecoin.

The true crypto enthusiasts would argue that certain entities like the Federal Reserve also can have a huge impact on prices in the traditional markets. Of course, whether or not you believe that the FED “manipulates” interest rates and thus prices is a subject for debate. But it is certainly true that markets of all maturities are sometimes led by sentiment, it just may be that market participants in memecoins are a little more impulsive than in other markets.

How to Trade Dogecoin

If you decide it is a good idea to trade Dogecoin, there are a few things you should take into consideration.

First of all, you need to decide if you want to trade spot or futures. If you believe in the concept of Dogecoin and cryptocurrencies in general, you might want to own the coin outright, only selling when you think the market is due for a correction. In this case, buying on the spot market would be ideal. It should be noted that you will be taking price risk, as you will essentially be fully invested in the coin, only trading around your position.

If, however, you decide to trade one of the many futures contracts (such a perpetual contract), you will get access to leverage. If used wisely, this can be an advantage, since you have more control over your position and exposure to price risk.

As mentioned, since Dogecoin is a very volatile asset (even for crypto!), using Bookmap to track price movements is a very wise idea. Not only will you see the aggressive market buying and selling—potentially signalling the start of a new trend—but you will also see the bids and offers, which can tell you how far a trend could go.

To get a truly global view of Dogecoin, you should use Multibook. Like other cryptocurrencies, Dogecoin trades on various exchanges across the world, and sometimes it’s hard to know its true price. With Multibook, you can combine up to 5 instruments across exchanges, even mixing spot and futures.

Some of the very one-sided movements of Dogecoin and other memecoins can make BTC or ETH pairs look like boring, conservative assets. For this reason, it is important to monitor the liquidity across exchanges if you are actively traded or are invested in one of these memecoins. There are countless Dogecoin related instruments that you can trade via Bookmap: both futures and spot, against a range of currencies—both fiat and cryptocurrencies. Let’s have a look at a few order flow examples from DOGEUSD using Multibook.

Just because Dogecoin is a unique asset, it doesn’t mean it doesn’t show the same universal order flow characteristics of other assets. The printing of a higher high or lower low to identify the direction of a trend is as old as technical analysis itself—-adding liquidity and volume dots to the fray only increases the insights a trader can glean. 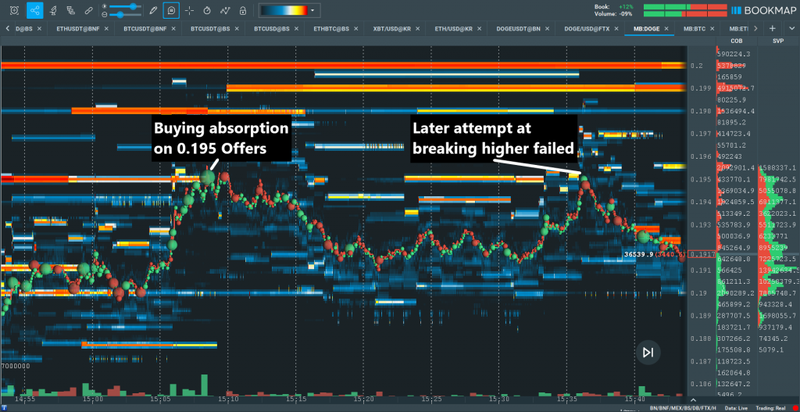 When prices meet liquidity that absorbs aggressive orders, the retest is often a very decisive moment. Sometimes aggressive players can just push through without looking back, but other times the momentum exhausts. In the case in figure 3, the aggressive buyers consumed all the offers yet still weren’t able to break the high on the second attempt, which is an even more substantial sign of weakness.

In figure 4, we see how prices seem to be attracted to the large laye of bids. This is the natural process of price discovery, as the market’s function is to facilitate transactions. Also, the bigger market players know they can’t get large orders filled just anywhere, so they have to trade into large levels of liquidity as to not push prices too far away from them, raising the cost of the trade.

All the usual order flow phenomena are regular occurrences even on memecoins like Dogecoin; absorption, exhaustion, and of course breakouts. They may be less regular than on other markets, but because Dogecoin is more of a niche product, a savvy trader might even be able to find new patterns that aren’t as exploitable in other markets.

Memecoins such as Dogecoin may prove to be more than just a joke. The power of the internet has opened up many avenues for communication and been the source of impressive financial growth over the past few decades. Dogecoin is something that mixes both, putting a number and thus some sort of valuing mechanism on internet memes.

Using Bookmap and its addons to trade this new class of cryptocurrencies is the best route when it comes to trading memecoins. With the right tools taken care of, all that is required is the right knowledge and mindset, the combination of which could allow the more adventurous traders amongst us to enter a class of their own in this niche within a niche.

Join us in Discord for an advanced webinar, starting now!

Bruce will be going through live order flow analysis.

If you arrived late at the station, jumping onto a moving train can be challenging.

Bookmap can help you aboard.

Join us in Discord for a live webinar with Scott Pulcini (@scottpulcinitr1) later today.

Free and open to all. Click here to join: https://t.co/yNL5LuTYpW

A rare opportunity to watch live market analysis from an experienced professional.