The Impact of Memes on Crypto

Because many meme currencies have an infinite supply and their popularity is mainly influenced by pop culture, meme coins are volatile and vulnerable to significant fluctuations in value, often in short periods of time.

Meme coins operate similarly to any other cryptocurrency, taking full advantage of blockchain technologies. They’ve been seen most frequently on blockchains that leverage smart contracts, most notably Ethereum and Solana.

What are Meme Coins?

Meme coins are notoriously volatile. They are mostly community-driven and may quickly gain popularity simply due to hype in certain online communities.

However, they are prone to lose value rapidly when traders shift their focus to the next hot meme coin.

The acronym “HODL” is an intended misspelling of the word “hold,” which has become a meme amongst cryptocurrency aficionados after a famous typo in a 2013 forum post.

The meme captures the volatile nature of crypto, as well as the sphere’s culture that brings a sense of bravado to traders that are able resist the impulse to sell their holdings in reaction to heavy falls in prices.

Following the term’s popularity on the internet’s crypto subculture, the acronym’s meaning to “Hold On For Dear Life” was subsequently affixed.

Despite their wild ride, meme coins remain a popular topic as this area of crypto still remains one of the hottest and fastest growing.

Here are a few of the most popular coins as of today.

Dogecoin, a coin based on the meme of an amazed Shiba Inu dog is the first big meme coin and often enjoys the benefit of association with none other than Elon Musk, who has posted many cryptic tweets suggesting his intention to HODL Dogecoin.

We have previously written an entire article about dogecoin and how to trade it here.

Shiba Inu appeared to be self-described as a Dogecoin Killer. Shiba Inu, which uses a known Japanese dog breed as its emblem, does not attempt to disguise its meme currency origins and has always been a community-driven enterprise.

Donelon Mars distinguishes itself by not attempting to be anything other than what it is. A project that is centered on a cartoon character, it even has its own comic strip.

Donelon Mars’s straightforward goal is to create a community that will emulate Dogecoin’s popularity.

Another meme coin for crypto traders to keep an eye on is the Samoyed coin. Samoyed Currency is a meme coin based on the Solana blockchain.

Dogecoin is quite similar to Monacoin meme currency in that it uses a proof-of-work consensus process to value exchange. Dogecoin and Monacoin have both established themselves as popular cryptocurrencies for online tipping.

How To Trade Meme Coins 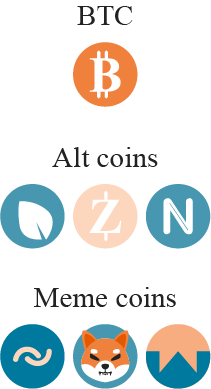 Even though meme coin markets are notoriously volatile, but many traders and investors continue to pile into them,

Most meme coins  are availabe on the same platforms you’d normally find the older and larger cryptocurrencies like Bitcoin and Ethereum.

How to Trade Culture

Memes coins are interesting beasts, because it is the first time culture comes with a price tag and fluctuating value. Essentially, they are the hyper-speed evolution of cultural ideas.

Because they are priced in cents rather than dollars and appear cheaper, these younger meme coins are frequently the go-to cryptocurrencies for novice investors and traders. Of course, in the world of crypto, the price of a coin often has nothing to do with its value.

As mentioned, Elon Musk seems to have hold over the Dogecoin community’s fanbase, and the price of the coin can fluctuate wildy based on his Tweets. If Musk actually ends up buying out Twitter, it could be an incredibly important moment for crypto.

Since the crypto market remains largely unregulated, there are no rules against such acts that verge on the edge of market manipulation.

Another example is ex-Google employee Nader Al-Naji,. In April, he launched BitClout, a cryptocurrency marketplace and Twitter-like service. Each user mints a unique meme coin worth whatever internet impressions they receive while posting it.

With new meme currencies hitting the market daily and traders trying to emulate the returns achieved by DOGE and SHIB, it is critical to do your own research before investing in any meme coins.

In comparison to other digital currencies, meme coins are pretty volatile, and trading or investing in cryptocurrency is not for the faint of heart. Meme coins are heavily community-driven and their value may be based on fleeting trends, so never invest money you can’t afford to lose.

👉One month of the best trading package at half-price for the same price.

👉Get access to some of the best addons in the business, including DOM Pro, Multibook Customizer, and Execution Pro

#bmbluejacket winner Rob Davies shows his trades on the ES (S&P 500) based on a stop run above the VWAP (Volume-Weighted Average Price) within the context of his volume profile analysis.

No morning stream today. Charles will be appearing on the @bookmap_pro youtube page and discord at 10AM.

See you there, me hearties!