What is the Random Walk Theory in Trading?

Anyone who has observed the markets for any length of time will have noticed the various cycles and patterns that the different assets seem to abide by. This search for the secrets behind how this behaviour works is the basis of most technical indicators. 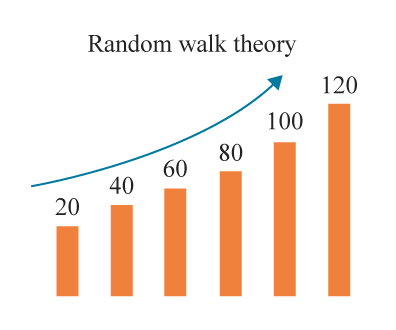 But criticisms are not few and far between, especially from the academic sphere.

The Random Walk Theory assumes that all price fluctuations are independent from one another, and thus it is impossible to predict the future direction. Let’s explore this theory further, look at its assumptions, how it can be used in your trading strategy, and some of the criticisms of the theory itself.

What is a Random Walk?

In mathematics, a random walk represents a defined path having a series of successive steps randomly distributed across mathematical space.

For example, in a number line consisting of several integers, we can go back and forth with an equal probability as each step moves by +1 or -1.

When this concept is used in the world of stocks and derivatives, it simply states that the historical price movements and trends exhibited by a particular asset cannot be used to predict future prices, as they are independent and follow an unpredictable path.

Burton Malkiel developed the theory in his 1973 book “A Random Walk Down Wall Street”. This book introduces the hypothesis that efficient markets are random. Let us try to understand what this means.

EMH (Efficient Market Hypothesis) is an earlier theory developed by professor William Sharp. This hypothesis states that asset prices reflect all publicly available information, as well as the expectations in the market. This means that current prices are the best approximation of an asset’s value, and thus consistently exploiting any sort of mispricing would effectively be impossible.

The idea of efficient markets also states that:

Arguments Against the Random Walk Theory 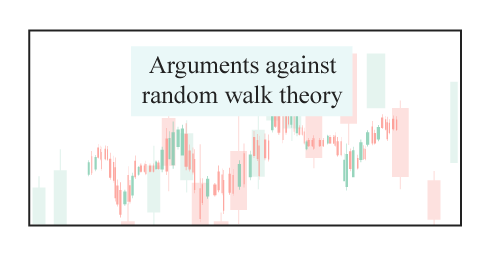 The supposedly impossible returns of legendary investors and traders such as Warren Buffet or George Soros act as proof that the EMH may not be strictly correct.

An outright rejection of the effectiveness of various technical indicators and fundamental analysis has naturally  led to several counterattacks and criticisms against the random walk theory, especially from market practitioners.

Some of of the evidence against efficiency of markets include:

Sometimes markets experience periods of trending prices, which we know as autocorrelation in statistics. This mathematical model of returns shows that trends do exist in asset prices. When a financial asset is in such a trending environment, then higher prices today increase the likelihood of even higher prices tomorrow.

This is usually caused by return-chasing market participants, who are often slow to react to new information in the market due to liquidity constraints or other factors such as regulations.

Hence, this proves that the efficient market hypothesis is not always valid, and while the market often trades at an equilibrium price, sometimes prices are slow to reflect new information in the market, meaning the market is neither random nor efficient.

Asset prices are constantly fluctuating. In some cases, often due to a period of autocorrelated returns (as described above), an asset may be trading far from its mean price.

The theory of mean reversion states that the long-term historical trend will hold, and any extreme price deviations from this range will eventually return to the mean.

Standard deviation is often used for mean-reverting strategies, and can also be used to measure risk.

A fat tail is the extreme end of a probability distribution, predicting a price movement of three or more standard deviations. Fat tails usually occur during times of market stress, but they can also be present in hyperbolic bull runs.

The historical evidence of fat tails seen in most assets is more evidence that markets are not a random walk—at least not all of the time.

How to Trade (with the Random Walk Theory in Mind) 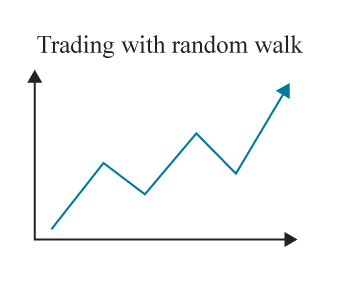 It is a fact that only the calculative, learned, and informed trader will succeed in the markets.

Knowing the random walk theory can help to understand that markets often go through different phases or cycles.

Let us learn how to trade with random walk theory in mind.

Markets can be iffy. Markets and life are such that you never know what will next. An asset’s price can crash or soar based on new developments or information, which are often exogenous events.

Hence, you should always have a probability-based mindset in your trading. It can be helpful to remember that:

Not all market participants are speculators, especially in the derivatives markets. However, regardless of an individual participant’s goals in the market, it is a fact that markets are a zero sum game: for everyone winning trade, there must be a loser on the other side of the transaction.

What separates a novice and a seasoned trader is having their expectations grounded in reality.

No veteran goes into a trade without first calculating the only thing they can control: potential downside risks. The wins will take care of themselves.

With time, a dedicated trader will als learn to differentiate between objectivity and emotion. Accepting losing trades is the first step in the path to a profitable and sustainable trading strategy.

Tilting the Odds in Your Favor

Markets have a lot of noise, often viewed as ‘randomness’. It is the trader’s job to separate the signal from the noise. However, this is not always easy, as events can be quick to develop. This results in losses as the trader tests their hypothesis.

However, being a disciplined and informed trader, you can definitely tilt the odds in your favor, reducing the risk of a lack of discipline and trades spiralling out of control. The best traders always:

Remembering these simple points will increase your edge and prevent you from falling prey to the natural randomness of the markets.

Making money in the financial markets is not easy. However, awareness of the market behaviours can give you a fighting chance.

The random walk theory presents the idea that price movements are completely random, and only by assuming additional risk can a market participant have any chance of outperforming the market.

Naturally, this theory invites several criticisms, with jaw-dropping results from some traders suggesting otherwise, as well as ideas from statistics, such as autocorrelation, mean reversion, and fat tails.

Regardless, as a trader, you must always keep the idea that the market can sometimes be random in the back of your mind, and only trade using a probability-based approach.

Bookmap was designed by traders, for traders, and comes with an array of looks for filtering through the randomness of markets. Get started for free today.

What do you think of my #NQU2 analysis? via @bookmap_pro: NQ Long