NOTE: This blog entry is written by a Bookmap trader with his insights and thoughts on how to trade news in the crypto environment. The goal of this blog article is to get different perspectives from various traders on their strategies, analysis, and ways of approaching the market. We hope you find it helpful.

Bitcoin is the oldest of this asset class, but it’s still only 12 years old. While most financial products have related news flows, cryptocurrencies are still maturing and lack the consistency of a news events calendar.

Since the market is still evolving, any big market developments are quite literally breaking news—something which is always hard to trade.

A great example is the recent release of an SEC filing stating that Tesla bought over $1.5B for their cash reserves. Just minutes after the story hit the wires, BTCUSD broke its previous ATH of $42k and moved as high as $46.7k, trading up nearly +20% on the day.

The first first question should always be, is the news good or bad? If unsure, look to price action. If the instrument is trading higher on the news, it’s probably something that the market considers to be positive, and vice versa if prices are trading lower.

But of course, day trading is not always that simple. A piece of news can be positive and the price can still drop. As the saying goes, “buy the rumour, sell the fact”.

The Tesla story is actually something that many people were speculating on as a potential reality, including none other than Michael Saylor—the CEO that was buying BTC for corporate treasuries before it was cool. In fact, the man behind Microstrategy’s bold move was even asked about it by Elon Musk on Twitter just months before. 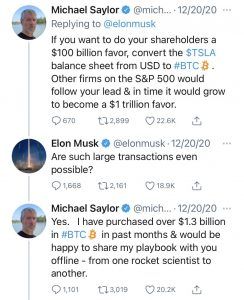 Making The Trade: Protecting The Downside

Regardless of whether or not a trader is following fundamental market developments, market action tells all.

Bookmap shows that BTCUSD has had a strong, positive cumulative volume delta on an almost daily basis, and the pair has been consistently printing one ATH after another. In a nutshell, BTC is in a strong bull market.

Coming into the news, BTCUSD was approaching its previous all time high of about $42k (depending on the exchange), a level which was over 7% away from where prices were trading at the time.

Even though BTC has historically made some big moves even on days without much news, it’s safe to say that few traders expected the level to break that same day. Although it was certainly the next big target.

Minutes later, large buy stops from both market participants who were short and breakout traders continued the frenzied buying through $43k. 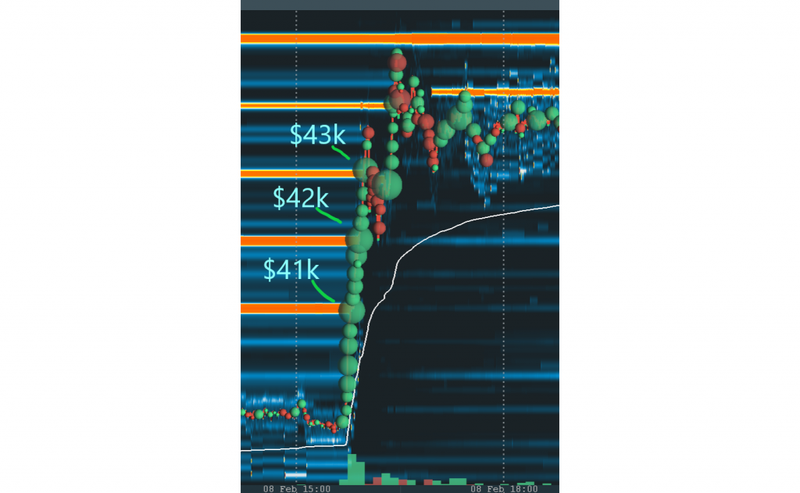 With such a strong move, traders may want to avoid being trigger happy with the market order button. It’s advisable to stay calm and let the dust settle, because a thin order book can lead to extreme price whipsawing. Trying to jump into the market too impulsively could easily lead to getting shaken out of the position, even if you get the overall direction right.

There is also risk of slippage on order execution, which further skews risk to the downside and messes up position sizing calculations.

In this case, the market provides a potential entry point on the retest of the $42k level. Obviously prices are still moving rapidly, so waiting for buyers to show willingness to print another higher high on the way up to the $44k offers would provide further confirmation. 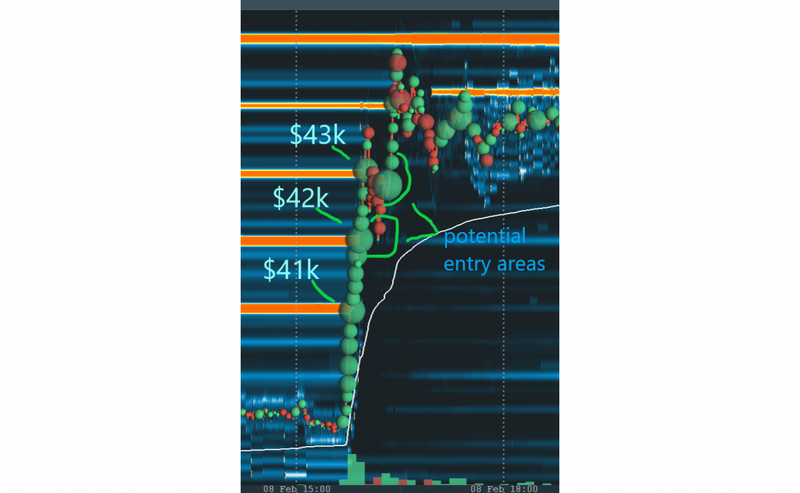 Exit stops for these entries would naturally sit either under $41k, or the swing low of $42k, depending on how aggressive the trader is.

The first target in this trade was $44k, where the trader could take full or partial profits.

Here buyers took out the $44k offers but lacked the momentum to continue through $45k, prices trading just shy of the level.

When the large offers at $44k reappeared on attempt at the retest and large buying failed to push through, this was a signal to exit the remaining position or even get short for a retest of the previous ATH at $42k.

As prices came down, large bids were posted at the previous ATH of $42k,  the market showing a willingness to provide support at that level.

Putting It All Together

Traders should remember to maintain composure when facing breaking news. If something unexpected comes along, it can be a temporary shock to the market. It takes time for the participants to correctly gauge the potential fundamental impact and for price discovery to find some level of equilibrium.

Even if you are not up to speed with the latest developments in the news cycle, you can still let market action gauge your response to the release.

Allow the market to take a breather after the initial reaction of the first few seconds or minutes. Once the order book fills back up, the day trader can see if the market wants to follow through or if it was just a reactionary spike that can be faded.

Remember, these kinds of opportunities don’t come along very often. But when they do, they can be immensely profitable. Your only mission as a trader is to avoid the many pitfalls, and Bookmap can give you that ever so vital edge.

US Fed's Rosengren commenting that there will be tight labor market for 2 years.

Unemployment rates will have a big impact on market trends in long-term.
#Bookmap #trading

Interesting price action in the #NQ_F. It finally got above the POC at 13783 but remains a single distribution day.#Bookmap #trading #DayTrading #OrderFlow

@bookmap_pro earlier cheeky BTD trade between food, key to me being the nice new bloods added and only one taken, also the usual rally BS we have day in day out, wide stops but that needs work ASAP - thanks to fellow pirate ?@roztom for his final frames advice & encouragements!🏴‍☠️