How to Profit from a Falling Market with Short Selling

Short selling is one way for a trader to profit from a falling market price. At first, short selling can seem quite complex, but in actual fact, it is a relatively straightforward concept: the seller borrows an asset to buy back at a later date. That being said, shorting for speculation is a very sophisticated trading tool and isn’t for the faint of heart, so don’t try it without first reading this article (and fully understanding it). 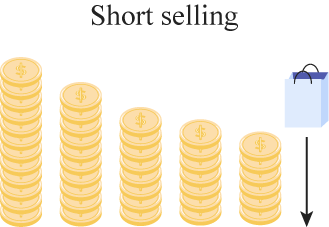 However, short selling can also be used to hedge risk, not just speculation. Read on to learn about the risks and opportunities presented by short selling.

If you have a directional bias about the price of an asset and express it with derivatives, this is called your delta exposure. If for whatever reason you want to keep the asset but wish to not be exposed to price risk, you can hedge the asset you own by short selling a futures contract.

This is a more conservitve way of utilising short selling, but doesn’t come without its own risks. For instance, the trader will have to make sure they have enough margin to cover the short position if prices move up, otherwise the position could be liquidated and the portfolio once again exposed to downside risk.

Profit from a Falling Price

The other (and often trickier) way of short selling is when looking to profit from falling prices. Some traders, such as Jim Chanos, are famous for short selling, as highlighted in our article 5 of the Best Trades of All Time. This can be especially lucrative in stocks, since they tend to fall faster than they rise.

Short selling can be conducted by traders of all types; scalpers, day traders, news traders, swing traders, position traders, algorithmic traders, etc. but short selling can be especially profitable for traders that are able to accurately anticipate when a market with a long-bias or extremely positive sentiment is about to capitulate. Sometimes, this can be exacerbated by whales.

Short selling is definitely risky business if not managed correctly. Let’s explore three of the biggest factors to consider when partaking in a short selling operation.

For starters, margin comes with its own fees. Sometimes the margin required to borrow the asset for short selling is so expensive that it can render the potential trade unprofitable, even if it was to materialize at the full risk:reward target.

It also means that in the case of the asset you are short selling rising in value (moving against your short position), eventually trading higher than the value of required maintenance margin, a margin call will be received. If you fail to cough up more capital, your position will be liquidated.

Short squeezes can sometimes wipe out short sellers. A short squeeze usually occurs when a short trade is overcrowded, with many traders (or a few very large traders) piling into the same trade and expecting lower prices.

Since markets are a voting mechanism for the future, usually when too many market participants expect the same thing, prices do the opposite. In the case of many short sellers flooding the market, this can lead to a short squeeze. Once they are out of the market, price discovery is then free to continue its process.

Price Can Be Zero Or Infinite.

Short selling comes with a few negative points; it can be complicated to structure the trade, it comes with separate costs, you will often be trading against the market, there is short squeeze risk, and then there is the killer—every short trade has a limited profit potential, because (most) assets can only trade to zero, and no further.

But from the other side, there is theoretically no limit to how high the price can go, so going long only has a higher potential risk:reward. This of course depends on the amount of leverage you use, and for traders with very short-term horizons, this might not even be a consideration in the risk:reward of their trades.

Short selling means borrowing an asset to sell now and buy back later. Short selling can be done for speculation as well as hedging. It doesn’t come without its risk—even short selling for hedging requires the trader to accurately calculate margin costs. Despite the risks, short selling is another tool to add to a trader’s arsenal.