What is a Central Bank?

The primary goal of central banks is usually price stability. Some central banks also abide by a legal mandate for “full employment”. 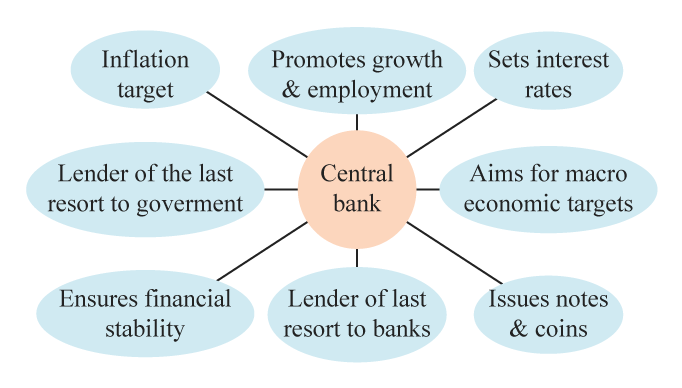 The setting of interest rates (the “cost of money”) is probably the most common and powerful tool of monetary policy available to every central bank.

A Brief History of Central Banking

The National Banking Act of 1863 established a network of banking institutions. Similarly, in the United States, the Federal Reserve, which serves as the country’s central bank, was founded in 1913, following the Federal Reserve Act by Congress.

The Difference Between Commercial and Central Banks

Banks play an essential role in a country’s economy. They are the essential entities in regulating a country’s overall economic growth, since they provide credit.

Central banks, as well as leading monetary policy, also lend to commercial banks (usually in times of crisis). This is why central banks are often labeled as the “lender of last resort”.

Lower down the funnel, commercial banks facilitate money movement in an economy by offering recurring deposits and credit facilities. Individuals and businesses can obtain financial services from commercial banks.

The role of central banks is to ensure the financial system’s stability and manage the economy.

The Federal Reserve System of the United States (Fed)

The Federal Reserve, often shortened to just “The Fed”, is the central bank of the United States.

Since the US dollar accounts for over 90% of all currency transactions worldwide, the Federal Reserve is sometimes dubbed the “world’s central bank”.

In 1999, the European Central Bank was founded. The ECB’s executive council is the committee that makes monetary policy decisions.

The council comprises six members of the ECB’s executive board, as well as the directors of all 19 eurozone nations’ central banks.

The Bank of England (BoE)

The Bank of England (BoE) is an independent public organisation, which means it is accountable to the British people under parliament. It was founded in 1694, only being natiolised in 1946, and is widely regarded as one of the world’s most significant and oldest central banks.

Its purpose is to keep its economic and credit systems stable, and the central bank has set a 2% inflation objective to achieve this. If measured inflation exceeds that value, the central bank will attempt to reduce inflation with the various monetary policy tools at its disposal.

The Bank of Japan (BoJ)

The Bank of Japan (BOJ) was established in 1882. Its purpose is to maintain economic stability and the financial system’s stability. As a result, the central bank’s primary concern is inflation.

Because Japan is so reliant on exports, the BOJ is more concerned about preventing a too-strong currency than the ECB. This can sometimes happen in times of global economic crisis, since the Japanese Yen is considered a safe haven.

The Swiss National Bank is autonomous in its implementation of the country’s monetary policy. Its primary purpose is to preserve price stability while monitoring the economic conditions in the country. There are two offices: one in Berne and another in Zurich.

Switzerland is heavily reliant on exports, therefore like the BoJ, the SNBdoesn’t want to see its currency grow overly strong. As a result, its typical inclination is to be more cautious with rate rises, after the previous currency rate peg experiment proved to be a failure.

What Does A Central Bank Do?

Even though all central banks have the same fundamental job of making money supply and controlling the creation and sharing of many (cash and banknotes) in a country, their tasks vary somewhat across countries.

Control of a country’s monetary supply – central banks produce banknotes and cash and establish interest rates based on the type of economy a country has at the time.

Why are Central Banks Important?

Central banks implement a country’s money supply, oversee it, and are frequently tasked with ensuring low inflation rates and stable GDP growth. On a macroeconomic level, central banks affect lending rates and engage in the open market to manage the cost of debt and lending across the economy.

Central banks play an essential role in money supply by aiming for price stability (low and steady inflation) and assisting in managing economic swings. Over the last several decades, national policies have undergone significant changes as central banks have had to adjust to a rapidly evolving global economic structure and order.

A central bank’s role in ensuring financial and economic stability is crucial. After the global financial crisis of 2007-2008, central banks globally have diversified their toolkits to manage financial stability risks and control volatile exchange rates.

Control of the Money Supply

A central bank establishes standards for the financial sector, like the amount of funds reserves that banks must keep about their deposits.

A central bank can act as a last-resort lender for distressed financial firms and governments.

How Central Banks Can Affect Your Trading

Since central banks have unlimited balance sheets (as proven during the 2007-2008 financial crisis), they are the biggest players in the market. This is why traders are very careful to monitor their movements.

News traders exclusively trade events, which central bank events such as interest rate decisions being one of the most volatile. You can read more about this topic in our article How to Trade the News. 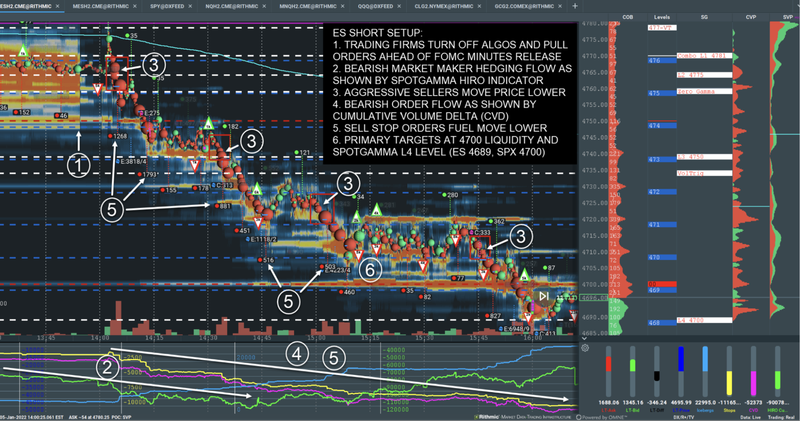 As can be seen in the image of of Bookmap’s heatmap before an FOMC (Federal Open Market Committe) meeting, liquidity in the order book becomes very thin before the event occurs and then price begins trending downwards. Fundamental traders would have probably been positioned beforehand, but order flow traders often like to see how other traders react before taking a position. If the volatility is managed correctly, central bank news events can be very profitable.

Central bnaks can be thought of as the “head” of national state economies. With the aid of tools such as interest rate changes and money printing, central banks implement  their monetary policy mandates, which ultimately impacts the economy.