Over four incredible days, FTX went from third-largest crypto exchange to near-collapse. With its back against the wall, Binance announced that it was planning to buy the company. And then it wasn’t. There were immediate consequences for cryptocurrencies. Is the worst over? 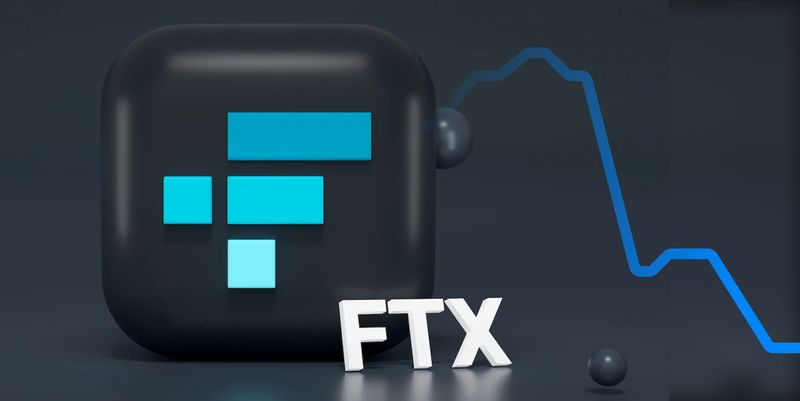 So how did we get here and what could happen next?  Let’s begin with the big headlines, before we look at the background to these events.

On the 8th of November, 2022, Changpeng Zhao, co-founder and CEO of Binance posted a Tweet saying they have signed a non-binding Letter of Intent to fully acquire FTX.com. 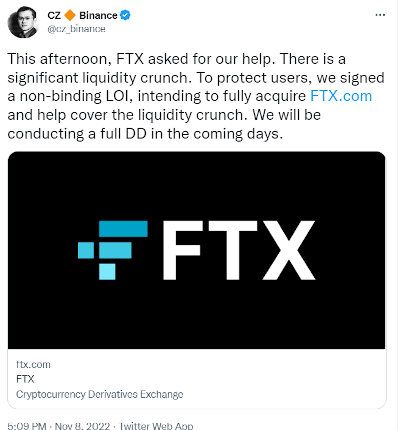 Sam Bankman-Fried, CEO of FTX (@SBF_FTX on Twitter) also Tweeted a similar message around the same time, stating that “we have come to an agreement on a strategic transaction with Binance for FTX.com (pending DD etc.)”.

And then it didn’t happen. Changpeng Zhao announced on the 9th of November that the deal was not going ahead.

Where it began? Binance moves to sell FTX’s tokens

Binance—the world’s largest crypto exchange—had been in a head-to-head battle with FTX, the third largest, for some days.

The feud began with Binance exacerbating a run on FTX when, on the 6th of November; they announced they would begin liquidating FTX’s FTT tokens on their balance sheet. The Binance CEO tweeted that “we will try to do so in a way that minimizes market impact.”

Unfortunately, the result was radically different.

FTT is the native token of the FTX exchange, which promises owners lower trading costs and the ability to earn interest when staking the token. 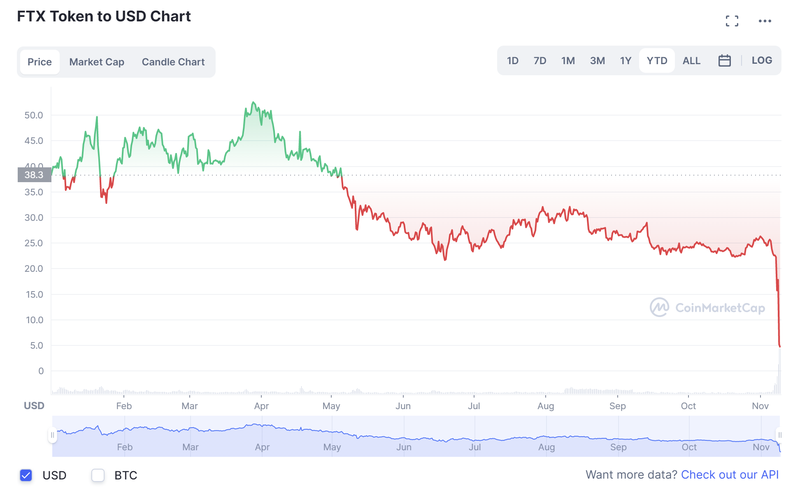 The Connection Between FTT, FTX, and Alameda

The backstory gets murkier however. A sister company of FTX, Alameda Research is a quantitative trading firm that was founded by Sam Bankman-Fried. It is not known exactly how the firm manages their $1 billion in assets, but in one video they claim being a liquidity provider as one of their main strategies.

One of the big fears that led to this unwinding of the FTT token and subsequent liquidity issues of FTX is the fact that Alameda Research held a large portion of its balance sheet was concentrated in FTT, 173 million of which were sent to a wallet controlled by FTX. This led to suspicions that the exchange was facing a liquidity crisis, which was made worse when many users were unable to withdraw their capital.

Perhaps ironically, the same video goes on to explain how liquidations work in Bitcoin, something that we are seeing a lot of today.

Contagion and lack of confidence in other cryptocurrencies soon spread. BTCUSD saw liquidations of $640 million on the 8th of November, with many millions being liquidated in the last few days too, as the pair makes a new low for the year just shy of $15,500.

Our new Liquidation addon (here in its web version), shows the extent of these liquidations live on the heatmap. 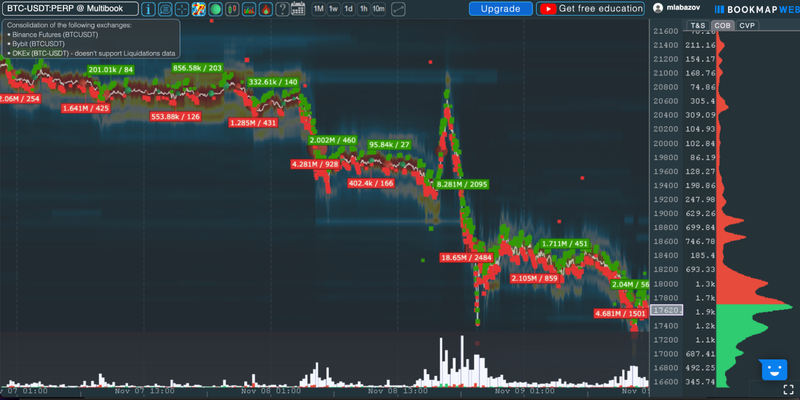 For all crypto traders and news traders out there, a word of caution. This is an ongoing story, and there are even fears of this story spreading to the broader market. Nobody knows the true extent of this event, but some analysts on Twitter estimate there could be a credit contraction of $10bn.

Since Binance has pulled out of the deal and there is a potential liquidity crisis running much deeper than the market is currently aware of, the risk remains that FTX could go down and take crypto market prices with it.

The true hardcore Bitcoin bulls are buying and saying lower prices just mean a better average price, but sentiment indexes such as the Fear & Greed index are still showing levels of extreme fear.

BTCUSD Multibook on Bookmap Web shows large layers of bids that may provide some support, having appeared on the 9th of November from $15k down to $13.5k. 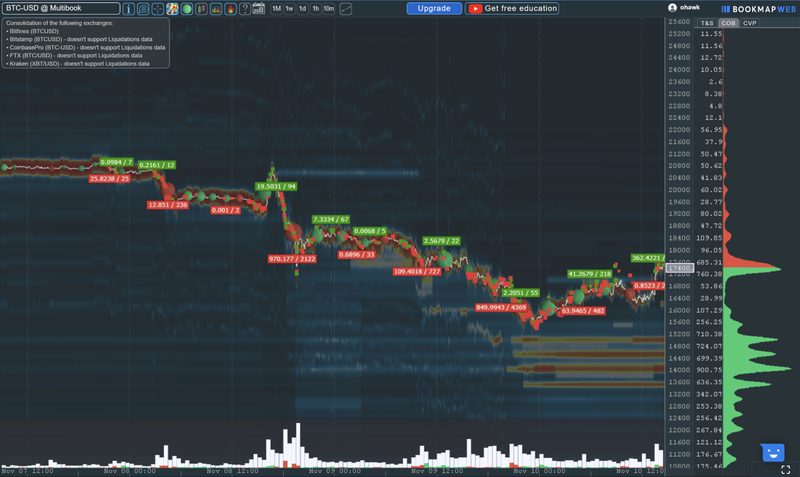 Is this the perfect buying opportunity or can prices fall further still? Join the conversation and let us know what you think in our crypto channel on Discord.

One of Jtrader's traders, Vic, takes a short position in #AMZN using order flow to time a successful short entry.

⏰ There are just 3 days remaining in the biggest Bookmap sale of the year!

💡Don’t miss out on these discounts for the first month.

Trader dov with another #ES short after a pullback to a big volume dot sell.

Order Types: Icebergs and How To Spot Them